My Favorite and Most Embarrassing Celebrity Encounters Part -1

Posted on January 31, 2012 by Jonathanshensa

Greetings everyone and welcome to my first ever best and not so best moments of “The Outsiders Guide to the Inside of Hollywood”. Almost exactly Three years ago, I started my celebrity photo collection, in that time I’ve had a number of encounters, with celebrities. Some on the red carpet and some in fan areas across the street.

Last Friday, after unsuccessfully trying to attend and cover the opening of the reopening of the Sweetwater Music Hall in Mill Valley, that featured a performance by Bob Weir’s (Grateful Dead) band Ratdog, I decided to head to Stinson Beach (40 minutes North of San Francisco) to photograph some landscapes. After parking my car in the parking lot, I noticed a long red haired guy putting on his red and white sneakers. As I got closer I realized it was Sammy Hagar http://www.redrocker.com/, who had just performed with Ratdog the night before. I happened to be wearing my Furthur (Bob weir and Phil Lesh’s band) sweatshirt with dancing Grateful dead bears on it. After talking for a few seconds I asked if it was OK to photograph him. Not only did he allow me to photograph him but his wife took a picture of us. He was a really cool and down to earth guy. I was stoked to be able to add Sammy to the list of celebrities that I have pictures with. That list includes James Franco, James Hetfield, Matthew Morrison, Jennifer Morrison, and more. 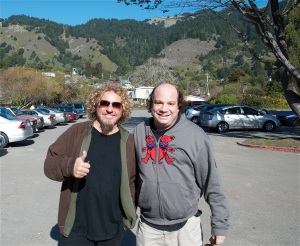 It was one event with Bob Weir, that would open my eyes to a horrific continuous event that takes place in Taiji, Wakayama, Japan. Last June, I found out that the California Film Institute in San Rafael (a non profit I had been doing staff photography with) was having a Benefit Screening of the 2010 Academy Award winner for Best Documentary Feature “The Cove”. I remember watching the Oscars and thinking what’s that about? I was able to cover the screening for the Institute and for the wire service I freelance for. As you might know from my previous blogs on “My Grateful Dead Experience “ part 1: http://wp.me/p1tOW9-2V and part: 2 http://tinyurl.com/7hudhh7, I’m a huge Deadhead. After seeing Bob perform from everywhere from stadiums to arenas and even on a mountain in Vermont, I couldn’t wait to see him perform in a small and intimate theatre. I decided that I should check out information online about “The Cove”.

What I saw horrified but educated me. The film is a call to action, to halt mass dolphin kills, from Japanese fishing practices. Dolphin meat has been found to  increasing hazard levels of mercury poisoning. The Dolphins are lured into The Cove where the ones who are not deemed trainable (Dolphin Shows) are butchered in a scene that looks like it came out of a Eli Roth film (“Hostel” film series). The film shows and  proves  that dolphin hunting as currently practiced in Japan is unnecessary and cruel.

When I got to the theatre I walked in to find my contact person from the Institute sitting down and watching Bob do a soundcheck for the Live performance part of the evening. My contact person motioned for me to come over. I was told to take photos as long as the flash was off. I felt uncomfortable at first because having managed bands and been through many sounds checks I didn’t want to intrude on those moments. I decided to stay towards the back and use a 200 lens. I’ve done many celebrity events but I must say that this was one of the harder ones not to be a super fan.

The evening started with the introduction of “The Cove”, by former dolphin trainer Ric O’Barry and “The National Geographic photographer and Filmmaker Louie Psihoyos. We also got to meet the person who put the event together by an eco activist and race car driver Leilani Münter http://www.leilanimunter.com/index_f.html who after seeing the film became one of the strongest advocators for Save Japan Dolphins http://SaveJapanDolphins.org/ Leilani is trying to raise awareness of dolphin slaughters and captivity by driving a Cove themed race car at the famous Daytona International Speedway. The ARCA race at Daytona will be held on February 18 to help her reach this goal go to OPS: Make a donation to The Cove Daytona Car www.opsociety.org

The film was magnificent and will change the way you look at Dolphin shows. As humans in  society today we tend to dissociate or pretend not to see things that bother us. The film only has about three minutes of footage from the dolphins slaughter. I feel that it is important for everyone out there to see this film. http://www.thecovemovie.com/Some things in the world can be prevented if enough people voice their concerns. I’m not sure how anyone and see “The Cove” and not be moved by it. http://www2.netflix.com/Movie/The-Cove/70112741

After the film and Q &A with Louie, Ric, Leilani and Bob Leilani introduced her brother in law Bob Weir, who played an acoustic set of songs from The Grateful Dead’s songbook which included Saint of Circumstance, Ripple and other favorites.

After the end of Bob’s set instead of exiting through the back door he  went into the lobby, where he was greeted by friends and fans. Some fans had Vinyl Records they brought from the 60’s and 70’s with them to sign. I ended up asking for someone to take a picture of the two of us. I was wearing an T-shirt for a non parisian voter registration organization http://www.headcount.org/ that Bob is on the Board of Directors. Unfortunately the person taking the picture zoomed in and cut off the shirt. I guess there’s always next time. Thanks for sticking with this blog. I know the subject mater, is different than any other I’ve done before. It might have been hard to deal with, but it’s an important one. People can change the world if they make enough noise.

My next experience I’m going to share with you today falls into the Most Embracing Moments with Celebrities category. For over 15 years I’ve been in love with Drew Barrymore http://www.drewbarrymore.org/.

One of the things that I love about Drew, is like myself she always speaks her mind and is not influenced by what others think. I’ve had a few meetings with her in the past. Her movie that she stared in and produced “He’s Just Not That Into You” Los Angeles premiere, was the first celebrity photos I ever did too. That day I was in the fan section. I was really disappointed that they didn’t have an LA premiere, for her latest film “Big Miracle”. I was hoping to finally photograph Drew officially on a carpet. When I do, I hope she doesn’t remember this.

Before I shot premiere’s and entertainment events with credentials, I use to hang out in the fan sections and wait to see if the stars signed autographs for the fans. My first two blogs goes into more details about it here: http://tinyurl.com/77dusmy and http://tinyurl.com/72ztq2o

The “Everybody’s Fine” premiere was part of AFI Fest 2009. I had waited on the side of the street but none of the stars came in my area. we were told that drew would not be attending. After 20 minutes of nothing going on I started to walk towards Hooters to eat something. After waiting for a few hours and not getting any pictures I thought the evening was over. Someone asked if I’d like to see the movie. I was overjoyed and thanked them. As I started to walk into the theatre a car pulled up and out popped Drew who headed quickly to the carpet for some pictures. Completely starstruck and in a gaze I went to the refreshment stand. Not thinking I’d get in and not having anything to eat i felt lightheaded. It was the night before the Yankees last World Series victory, so I was wearing my Yankee hat and jacket. A fellow New Yorker started talking to me. After a brief conversation I ordered my popcorn and soda. Normally for premiere’s the food is free but since it was a festival it wasn’t. I walked over to the butter machine and found it to be leaking like a faucet. The historic theater butter machine was directly across from a ladies or single person bathroom. As I pounded on the machine for the butter to come out like I was Rocky Balboa , the door opens and who walks out and has a front row seat for this was of course Drew. She gave me a look and a quick smile. Feeling embraced I headed to try and find my seat. As I walk by I’m almost elbow to elbow with the film star and fellow New Yorker Robert De Niro. As an usher starts to show me to my seat who is escorted in-front of me again but Drew. The movie was a very serious one but at that point all I could think about was that I was in a theater with Drew Barrymore only a few rows away and my only thought was let me get out of here before I embarrass myself again. You can catch Drew Barrymore’s latest movie “Big Miracle” http://www.everybodyloveswhales.com/ on Friday when it opens. 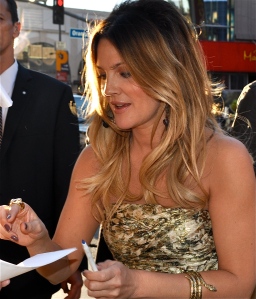 Thanks for joining me for this edition of “The Outsiders Guide to the inside of Hollywood.  Next week, I’ll be returning to the scene of the crime Grauman’s Chinese Theater for “The Vow” and “This Means War” premiere’s. For everyone in Twitterland , on Monday I’ll be tweeting from the red carpet at “The Vow” premiere @Jonathanshensa.